Recently, I’ve been getting interested in electronics and hardware again. After several discussions with my brother, a project we’ve been working on involves Simultaneous Localization and Mapping (SLAM). The idea behind SLAM is to build up a map of an environment while at the same time keeping track of your current position within the environment. As you can imagine, this has many applications in robotics - for example, some robot vacuum cleaners use SLAM to construct maps of the areas they’re cleaning, which allows them to more efficiently clean the room instead of bouncing around randomly, and some models even allow you to view the maps.

To get started, we chose to use Google’s Cartographer, as the authors published a nice paper on it and they also provide an integration to Robot Operating System. We used a low-cost, spinning hobby lidar device while walking around in an open space, and fed the data through Cartographer. You can see the algorithm in action in this image (warning for slower connections, GIF is 4MB). The output is a bird’s eye view of the room - darker spots indicate that there is a higher probability of an object being in that location. You can also see the trajectory of the lidar (e.g. us walking through the room) and some other Cartographer-specific information. When we compared this map to the actual measurements of the room, it was fairly accurate - the constructed map was accurate to within 30cm. I suspect that we can improve the accuracy further by attaching an IMU sensor and also providing this information to Cartographer.

There are also similar algorithms that use images/video instead of lidar as the input - these techniques are called visual SLAM and photogrammetry. I haven’t looked into those further yet, but I may post about it in the future if I ever get around to them. 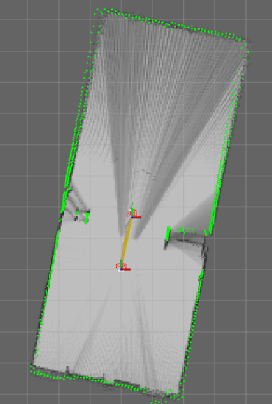